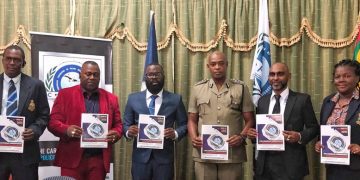 This story was posted 4 years ago
in General News, Politics
4 min. read

Police operations in the region are being impeded by political interference as politicians assert their influence with regard to promotions and transfers of police officers.

This sentiment was shared by President of the Caribbean Federation Police Welfare Association (CFPWA) and Assistant Superintendent of Police of the Trinidad and Tobago Police Service (TTPS), Anand Ramesar.

While acknowledging that political input in the operations of the police force is appropriate, he believes the police force in the region must be able to operate with a degree of autonomy of its internal affairs.

Ramesar has also called for a review of the compensation package for police who are sometimes called upon to work beyond 40 hours in a working environment that is increasingly proliferated with illegal guns and narcotics.

“There are a lot of police organisations which do not provide a decent work agenda for its police officers. Without naming any Caribbean islands, there are many countries where police officers work beyond 40 hours without any compensation for those hours. The issue of illegal guns and homicide is starting to fester in the Caribbean, so our police officers will face the same risks regardless of what jurisdictions they are in. So what we want is in terms of the employment package in relation to how you treat police officers in terms of wellness, by way of principle.”

Now that the association has launched its newsletter, the police force throughout the region can get up to date with the activities of police operations throughout the various territories.

The launch of its quarterly newsletter, Ramesar said is a step in the right direction as they seek to improve the welfare of police officers throughout the region.

Chairmen of the RGPF Welfare Association, Inspector Simon Douglas indicated that work is ongoing to launch the local association’s own newsletter to improve dissemination of information.

“We are going to launch our own newsletter to deal in-depth with what is happening with the local association. The medium by which things are disseminated often don’t work,so we have to find innovative ways to get to police officers to let them know what is happening and it is a disadvantage to the association if you do good things in some cases for officers within a particular department, and other members of that station or department are not aware of what you have done.”

During the official launch of the newsletter, President General of the Grenada Trade Union Council (GTUC) André Lewis delivered the feature address by first commending the Caribbean Federation Police Welfare Association for launching their newsletter, noting that they were able to accomplish such a feat in an area where most longstanding organisations have failed.

“The fact that you have launched the organization in 2007 and in 2019 you have been able to launch your first newsletter is a significant achievement and do not underestimate that because of quite a number of other organisations that have been around for a number of years have not been able to do that.”

Lewis also highlighted the importance of ensuring that the welfare of all police officers is maintained. “It is also important as we seek to improve the benefit of our members, the question of housing is important… because you cannot get a police officer to constantly put his or her life in the line of duty facing the criminals outside there and at the same time your family members are not being taken care of…we need to call upon our governments and our senior police officers to ensure that as part of the benefit of our officers, the aspect of housing is taken care of, “Lewis said.

The Caribbean Federation of Police Welfare Associations (CFPWA) was established in Nassau, The Bahamas on the 25 May 2007.

The association was formed after a memorandum of understanding was signed among 9 countries namely Jamaica, Trinidad and Tobago, Guyana, Barbados, St Vincent and the Grenadines, Grenada, Antigua and Barbuda, Bahamas, and Dominica. St Lucia, St Kitts and Nevis and the British Virgin Islands later joined.