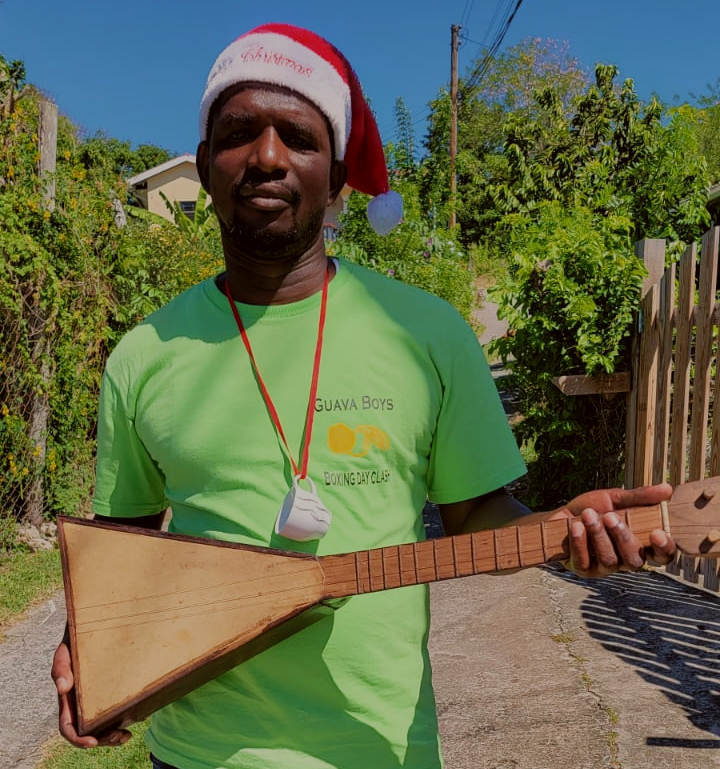 The distinctive sound of Carriacou’s string band music comes from the banjo, which musicians use to serenade during the Christmas season.

The instrument is popular during the Carriacou Maroon & String Band Music Festival and the Carriacou Parang Festival. Banjo making is part of the cultural traditions being kept alive as a testimony to the island’s proud heritage.

The akonting is a gourd-bodied lute of the Jola people of Senegal, Gambia, and Guinea-Bissau in West Africa and is recognised as the closest known African relative of the American banjo. The early development of banjo-making in Carriacou proved a challenge for this writer to find online; however, Rebecca S Miller’s 2007 book Carriacou String Band Serenade: Performing Identity in the Eastern Caribbean includes good information on the banjo’s history and place in Carriacou’s music traditions.

For Carriacouan (Kayak) musician Neal Bassie Matheson, the locally made 3-stringed banjo is instrumental to making the holiday season serenade more festive. “The banjo makes string music unique and we have one of the greatest banjo players to date right here in Carriacou and Petite Martinique. The island is the only place where in the world where you would see this 3-string banjo, because we invented that.”

Matheson said unlike the banjos imported from North America and Scotland which had light gauge strings, local makers of the banjo used nylon strings and later started using bicycle brakes strings, which gave the banjo a unique sound. Also, instead of having 5 strings like its American counterpart, the banjos made in Carriacou will usually have 3 strings. He said the 3-string banjo was invented because musicians could not readily source strings from North America and the UK and necessity made players start making their banjos using nylon, and later bicycle brakes strings.

“Gone are the days where you can’t get string because it might take you a month until the boat comes back from England to get strings so they used bicycle brakes — what we used to call peddle pushers — and one day a guy strung that out and turn that into strings and while tuning he realises that there is a unique sound in the banjo so that’s where the 3-string banjo came in. Back in the old days, banjos were made using boule calabash, and then later milk pan was used.”

Banjo making and paranging go hand in hand, especially around the holiday season, and this year is no exception. Matheson, one of many kayak custodians of the history of the island, gave recognition to deceased Herbert Lewis, as one of a few remaining banjos-makers on the island. He said the history of banjo making and paranging must be preserved for future generations. “Once we [begin] serenading, 3 am that banjo will wake you up. The sound of it once the morning dew takes it that’s when it rings out more so that what makes string music unique, out together with the mandolin and you have to have a good rhythm section with drums, percussion and iron that all gels and makes our music what it is,” he said.

Born out of the need to keep the cultural tradition of parang and serenading alive on the sister isles of Carriacou and Petite Martinique, the Culture Parang Train has now become customary around the holiday season after it restarted following a brief period of uncertainty in 2018 over the staging of the Carriacou Parang Festival.

“In 2019, we decided to spread the festivity over Petite Martinique again and for the first time to Union Island and also to mainland Grenada, where we visited various senior citizens’ homes and other places throughout Grenada. We were very much well-received and was anticipating 2020 to make it bigger and better, but then came Covid-19 so we started virtual activity and continued this year,” said Rina Mills, the brainchild behind the formation of the Carriacou Culture Train String Band Group, and Marketing Executive of the Grenada Tourism Authority (GTA) in Carriacou.

Mills with the assistance of Anderson ‘Leftist’ Matheson and Neal ‘Bassie’ Matheson, through the Carriacou Culture Train String Band Group, the Culture Parang Train has helped nurture the future generation of string band music and paranging, preserving the authenticity of its unique sound through the involvement of younger generation in the performance.

“We do many things to keep the culture alive. We decided that leading up to this year we were going to train a lot more young people because now we see that there are many people out there who love this just as much as we do and are passionate, including people from the diaspora who came on board and supported us this year and it is something that we want to develop and continue to do in the coming years ahead,” Mills said.

The Culture Parang Train involves the musical tradition of house-to-house serenading by acoustic string bands, accompanied with their instruments which include the bass drum, iron, guitar, quarto, violin, marack (shack-shack), mandolin, saxophone, tambourine, among others.

During the onset of the Covid-19 pandemic in 2020, the band, in keeping with established Government protocols, was forced to halt house-to-house serenading and started their virtual serenading at various locations across the island. Over the years, the Culture Parang Train has garnered corporate sponsorship and support and continues to grow in popularity.

Mills indicated that the group is open to suggestions on improving the Culture Parang Train and is inviting feedback from the public to help in the preservation of the Carriacou’s unique culture.