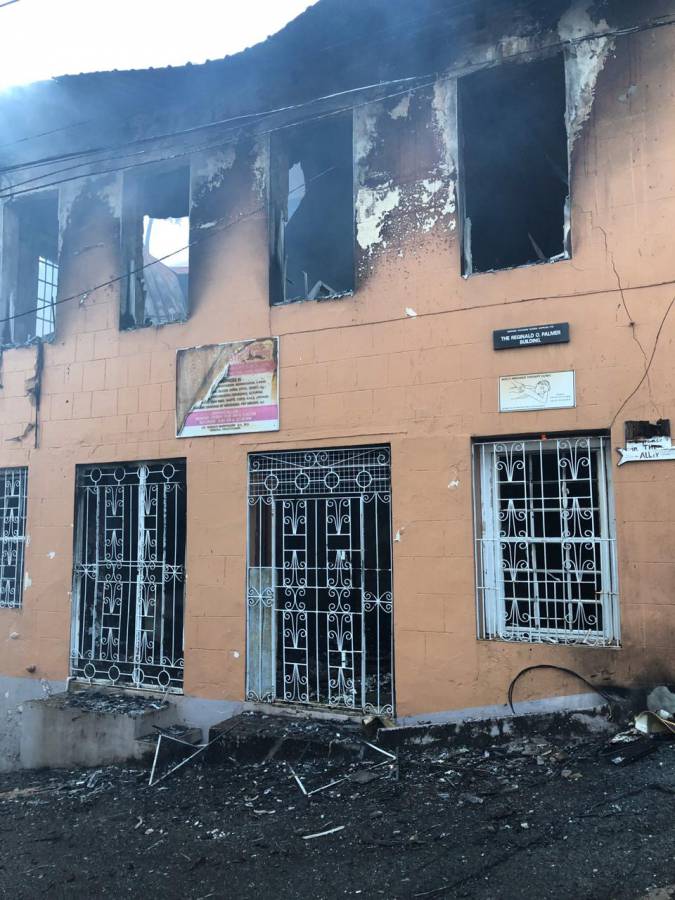 Massive fire on Grenville street could have been avoided

Massive fire on Grenville street could have been avoided

Dr Terence Marryshow is heartbroken after his clinic was destroyed by a massive fire which consumed 4 buildings and damaged 2 parked vehicles on Grenville Street, in the wee hours of 9 January 2020.

Marryshow’s Hospital & Health Clinic opened in 2014 at the corner of Grenville and Gore Streets, offering medical services to the public including ultrasound, mammogram, electrocardiogram (ECG), eye testing, and pharmaceuticals among other essential services.

Dr Marryshow said the last 30 years of hard work to establish such a faculty had been eroded in one night. Although police investigations are ongoing, fingers are being pointed to an abandoned building adjacent to the clinic where the fire is said to have started. That abandoned building was once used as a bakery and later an electronics repair shop before becoming vacant. That same building previously caught fire which resulted in partial damage to Dr Marryshow’s clinic.

“This has completely devastated everything that I have worked for in the last 30 years. All my equipment: I probably had one of the most comprehensive medical practices in Grenada housing everything: ultrasound, x-ray, laboratory equipment, a pharmacy, and computers plus new equipment that I had to install, and this is a blow. I am not sure how long it is going to take me to recover.”

Sources including Dr Marryshow who are very much concerned that the abandoned building encouraged drug addicts to frequent, clamoured for it to be addressed. “That fire did not begin in my building. There is an abandoned building right next to it where some years ago there was another fire. This building for years has been a fire hazard, and it has been abandoned for the last maybe 3 or 4 months,” he said.

The fire destroyed Trini Shoppe, a personal care and beauty supply business; and another building that sold Grenada independence paraphernalia.

Dr Marryshow noted that from all appearances, the fire could have been avoided. “I can’t confirm this independently, but people are saying that this fire actually started around 2:30 am and the response they said, they were waiting on Grenlec to turn off the electricity and that took some time. By the time the fire department got there, most people said it was about 2 hours later, there was hardly anything to do but try to contain the fire.”

In a release, the Fire Department stated that they arrived on the scene within 5 minutes of the initial report, but were unable to commence fire suppression since the affected building still had electrical power which posed an electrocution risk to the firefighters at the scene.

Community Relations Department, Superintendent of Police, Loxley John, said apart from the 4 buildings destroyed, there were 3 other buildings on the opposite side of the road which received minor damage.

NOW Grenada is not responsible for the opinions, statements or media content presented by contributors. In case of abuse, click here to report.
Tags: citycliniccurlan campbelldoctorfiregrenville streetst george'sterence marryshow
Next Post