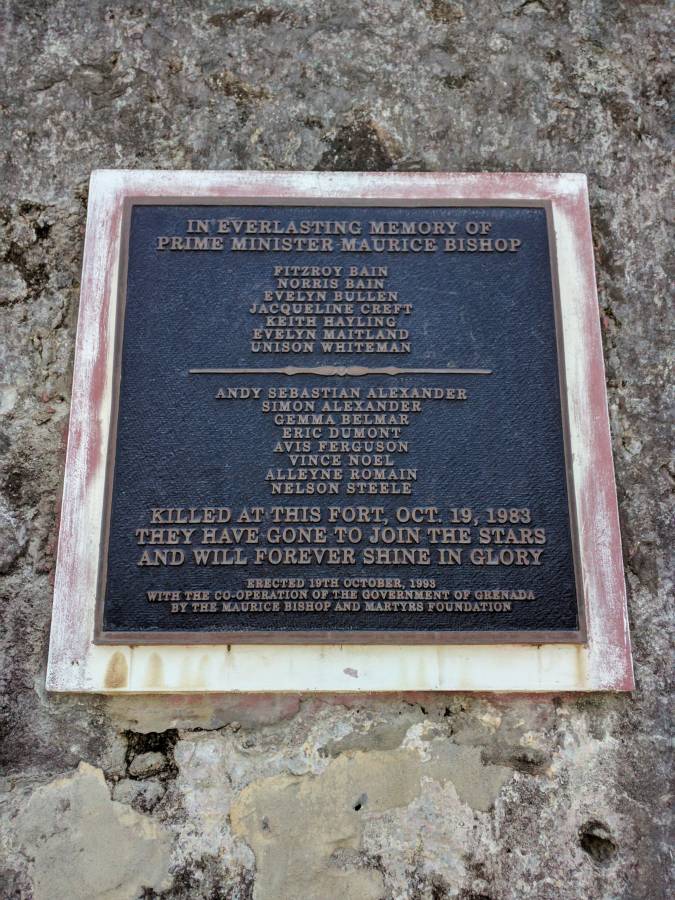 This story was posted 4 years ago
in Arts/Culture/Entertainment, Education, Politics
3 min. read

In the central courtyard at Fort George, a plaque marks where Maurice Bishop and his fellow cabinet ministers were killed
Share

“Sometimes we look at martyrs and say that they are dead, but unless our martyrs become heroes, they will never live onwards.”

Profound statements by His Lordship Bishop of the Diocese of St George’s in Grenada, Clyde Harvey, resonated in the minds of Grenadians, following mass on 19 October in remembrance of those whose lives were cut short at Fort George, formerly known as Fort Rupert, 35 years ago.

It was at that time that Prime Minister Maurice Bishop and members of his cabinet and loyal supporters were massacred by a rogue faction of the People’s Revolutionary Army (PRA) led by former Deputy Prime Minister Bernard Coard and Army Chief Hudson Austin.

The Maurice Bishop and October 19th, 1983 Martyrs Foundation remembers the sacrifice of those who fell following the demise of the Grenada Revolution. At the massacre site on Fort George, Bishop Harvey reminded the foundation of their obligation to continue to keep these names alive in the hearts and minds of Grenadians, and especially to those Grenadians who survived the ordeal.

He admonished the foundation to broaden their understanding of who are the heroes of 19 October and to honour them. He said, “There are heroes who are not on this list at the back of the programme. There are heroes who are not dead because of one of the people who called in, recounted watching nurses from the hospital come up to the hill and find people who were still alive, going through the carnage and picking up people at risk to themselves, confronting soldiers and understanding that their own task as people of Grenada, at the service of the people of Grenada, was to take that risk to their lives and in my view become heroes — but do we remember them.”

Bishop Harvey spoke of the immense influence the Grenadian Revolution had on the rest of the region. “The days between ‘79 to ‘83 were days throughout this region when young people had hope. A day when young people dared to dream dreams not only in Grenada; and if you in Grenada think that those dreams were only being dreamed in Grenada, you are wrong, but I think you know it because you know the number of young people who volunteered to come here, who volunteered to be part of a dream from which they didn’t want to wake up today; and we have to understand that it is out of that capacity to dream that Grenada made a gift to the region which I want to tell you is not dead. There are many efforts to kill it and those efforts will continue.”

A special plea was made by the bishop for the foundation to take the necessary steps to ensure that 19 October be revered as a national holiday and day of reflection and not wait on politicians.

“And what I want to put on the table today it is not enough to commemorate martyrs if we are to be true to those who have laid down their lives. We have not asked ourselves what harvest are we reaping? You do not have to wait on politicians to make this day a day to remember, a day that will become so powerful in the imagination of our young people that they may want to be a part of it. Because if you wait on politicians nothing will happen and, therefore, I want to urge very strongly that the foundation ‘Don’t wait until next year to plan today. Begin planning today next year’s ‘today’ tomorrow.”

The bishop suggested that the foundation ensure that next year every Grenadian household should be encouraged to honour those heroes alive by placing a banner with the pictures and names of those who didn’t die on 19 October 1983 as a true representation of martyrdom.

This year’s memorial service was held under the theme “35 years of pain still no closure yet seeking to bring a nation together in the name of reconciliation.” 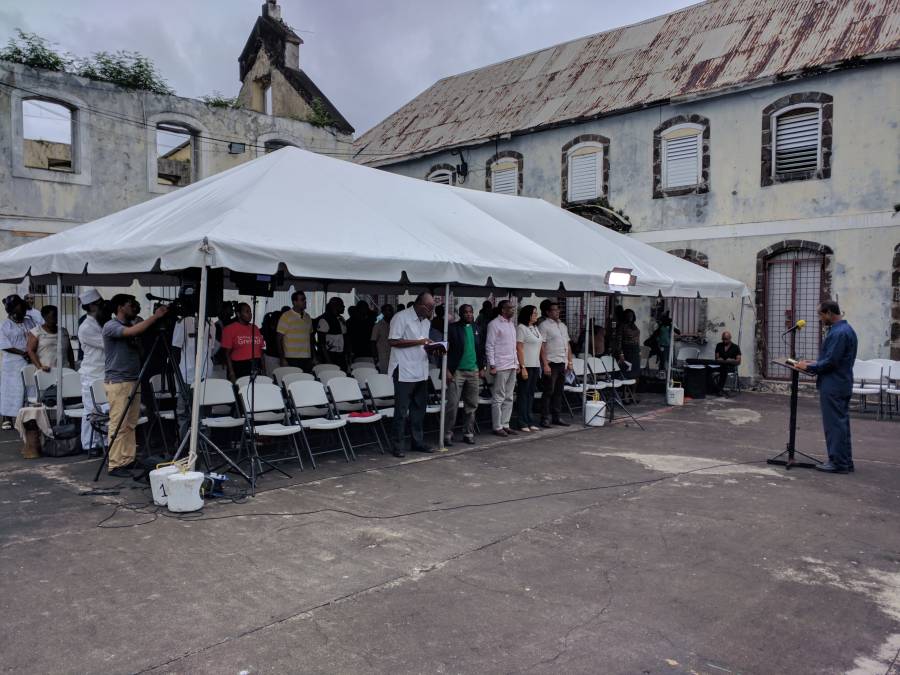