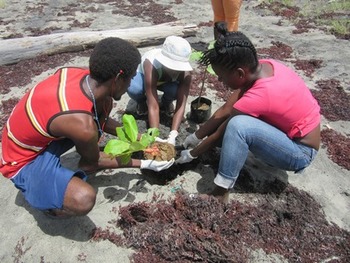 This story was posted 5 years ago
in Environment, PRESS RELEASE
2 min. read

Mangrove preservation is one way to protect our coastlines
Share

Grenada is the first Caricom country to complete its cabinet approved National Adaptation Plan. The achievement comes after in-depth work undertaken by the Environment Division at the Ministry of Agriculture, Lands, Forestry, Fisheries, and The Environment (MALFFE) in collaboration with the German Federal Ministry for the Environment, Nature Conservation, Building and Nuclear Safety (BMUB) as part of Grenada’s Integrate Climate Change Adaptation Strategies (ICCAS) project funded under BMUB International Climate Initiative (IKI).

The National Adaptation Plan, often referred to as ‘NAP’, was introduced by the United Nations Framework Convention on Climate Change (UNFCCC) as a tool for countries to reduce their vulnerability to the impacts of climate change by building adaptive capacity and resilience. Rather than being an end in itself, the NAP is a continuous, progressive and iterative process which follows a country-driven, gender-sensitive, participatory and fully transparent approach to climate resilience. The Grenada NAP draws on and integrates key aspects of Grenada’s national strategic development targets, Grenada’s draft National Sustainable Development Plan 2030, priority sectoral corporate plans, and the Public Sector Investment Programme (PSIP). It is a robust document that supports the regional Caricom’s Climate Change Implementation Plan (2011-2021) and is in line with Grenada’s Revised National Climate Change Policy and Nationally Determined Contributions (iNDCs).

Merina Jessamy, Permanent Secretary for Environment stated, “In developing the NAP, consultations were held with over 160 representatives from government and private actors across numerous sectors including water, food security, coastal zone management, resilient infrastructure, disaster risk reduction and disease prevention. The development process of the NAP spanned over two years so this was truly a participatory and inclusive process. The document was finally approved by Cabinet decision in November 2017 prior to UNFCCC COP23.”

In the case of Grenada, the NAP includes a number of actions and projects to be implemented in order to reduce Grenada vulnerability to Climate Change. The purpose is to give potential donors and funding agencies concrete ideas about financing opportunities for climate resilient action. Pioneering the publication of its NAP in the Caribbean region gives Grenada a leading edge in accessing finance to implement the various projects. Dieter Rothenberger, Head of GIZ-ICCAS said, “Under the ICCAS project, Grenada has already successfully secured a Climate Finance Readiness programme under the Green Climate Fund, which is the first step in accessing climate finance. The publication of the NAP represents another step forward.” Based on the NAP a comprehensive water sector resilience project (valued at approximately US$50 million), has been developed jointly by GIZ, NAWASA and the Ministry of Finance. It has been submitted and is currently being reviewed by the Green Climate Fund.

NOW Grenada is not responsible for the opinions, statements or media content presented by contributors. In case of abuse, click here to report.
Tags: caricomclimate changegiziccas
Next Post