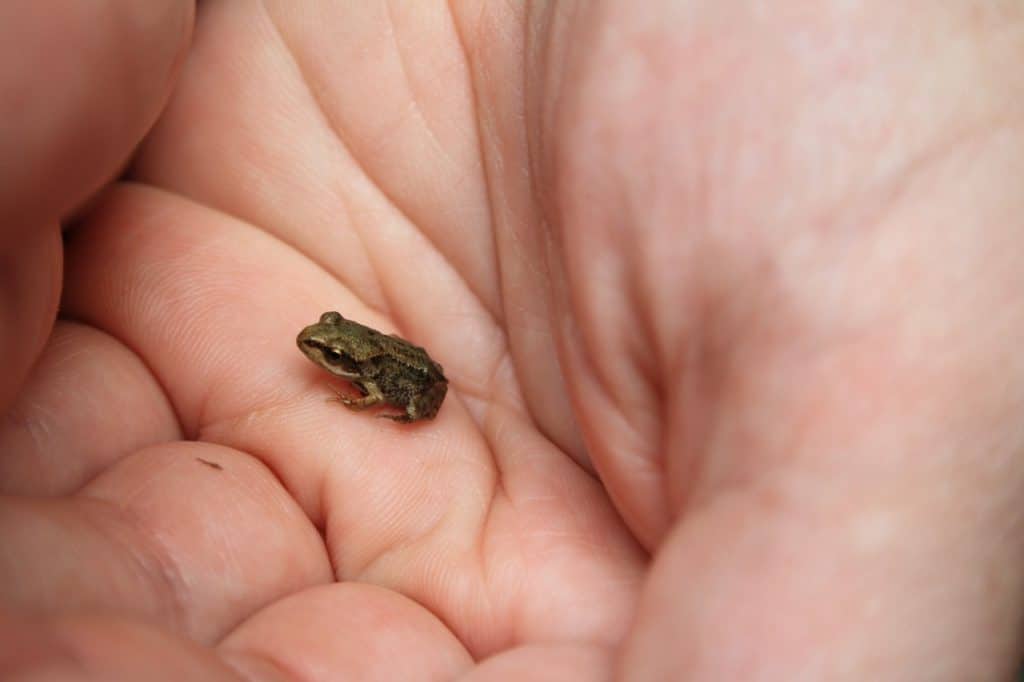 This story was posted 2 years ago
in Environment
3 min. read

Eleutherodactylus euphronides is a tiny tree frog that is endemic to Grenada. Photo: Petit Anse
Share

Juengling is fighting to save Grenada’s endangered species. He is particularly concerned about the tiny Eleutherodactylus euphronides frog. This frog is only found in Grenada. It lives in the rainforests on the island’s central mountainous spine.

Juengling is no stranger to animal rights activism. He protested the Ringling Brothers Circus in 2012 when they went to the Rose Garden in Portland, Oregon. Juengling has also campaigned to end the sale of foie gras online. And, he fought to outlaw imports from trophy hunting into the United States. He is one of the official supporters of Million Dollar Vegan. This campaign is to get high-profile celebrities, including the Pope, to go vegan for Lent.

In December 2013, Juengling petitioned the Idaho Senate and House of Representatives. He sought to ban the sale, distribution and transporting of shark fins within that state. Now Juengling intends to petition the Grenada Parliament. He has already started a Care2 campaign, https://www.thepetitionsite.com/886/811/399/protect-endangered-animals-in-grenada/.

Once that campaign gets 1,000 signatures, he will approach our parliament. The campaign is already near the halfway mark, with signatories from all over the globe. People from as far away as Poland are rallying behind the cause, and from New Zealand, Sweden, and Chile.

Juengling has already reached out to the Grenada Tourism Authority. He has encouraged that body to consider the concept of “ethical tourism.” Grenada has reopened its borders following the Covid-19 shutdown. Tourists are trickling in. Juengling is positing the country can benefit from a law protecting endangered species.

With ethical tourism on the rise, so is public support for endangered species. A University of Michigan study found “…species conservation is of greater concern than other issues and attitudes that have become associated with the concept of environmentalism.” Grenada has a law focusing on the mistreatment of domestic animals. At present, the country does not have anything on the law books to protect endangered species.

Grenada has varied and fascinating wildlife. The rare 9-banded armadillo (known to locals as tatou) lives here. Feral goats roam the countryside. The Grand Etang Rainforest is home to bright green iguanas and mona monkeys. On Frigate Island, near Carriacou, you will find red-legged tortoises. Known to locals as morrocoy, these tortoises also live on the mainland, and sometimes appear in peoples’ gardens.

Grenada has several animals on the endangered list, including quite a few fish species, such as great white and hammerhead sharks. It also includes 11 different species of coral and 9 birds. Among the birds are the brown pelican (known to locals as grand gougier, found in Carriacou). The Grenada Dove, which is the island’s national bird, is also endangered.

In 2014, the Ministry of Agriculture submitted endangered animals to the International Union for Conservation of Nature (IUCN) for consideration. This list included Robinson’s mouse opossum (manicou), the tree boa (serpent), and the cribo. The IUCN lists the mona monkey as near-threatened.

The leatherback, which is the largest of the marine turtles, is a frequent visitor to Grenada. These turtles travel 10,000 miles every year to feed and mate. This critically endangered species has a nesting site on Levera Beach, at the north of the island. Grenada is home to other endangered turtles such as the loggerhead, green, and hawksbill species.

We must protect Grenada’s endangered species. If Juengling is successful, not only the endangered animals will benefit. It will enhance our tourism product, and thus the people of Grenada stand to benefit as well.

NOW Grenada is not responsible for the opinions, statements or media content presented by contributors. In case of abuse, click here to report.
Tags: animal rightseleutherodactylus euphronidesendangered speciesfrogkonrad juengling
Next Post

The benefits of pumpkin