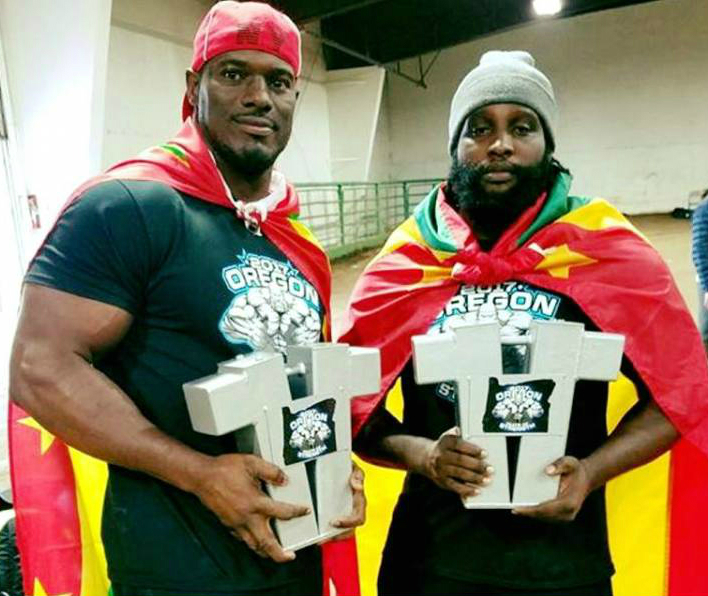 Grenadian strongman aims for gold again in US

Grenadian strongman aims for gold again in US

This story was posted 4 years ago
in Sports
2 min. read

After becoming the first Grenadian to compete in and bring home gold from the annual Oregon Feats of Strength Competition in March 2017 in Oregon, USA, Marcus “Grizzly” Alexander prepares to repeat history in the upcoming River City Barbells Iron Asylum Strongman competition in Dayton, Kentucky, USA.

Alexander left the island on Tuesday and has reunited with Coach Mc Elvin Pope, an ex-powerlifter. During the Oregon competition, Alexander won in the stone-lifting event in a time of 18.43 seconds smashing the previous record of 30 seconds and beating competitors from all over the world.

Speaking with NOW Grenada, Alexander indicated that he is mentally prepared for the competition. “I feel very confident and expect to walk out in the top 3 in the open 275-pound weight class. My coach worked tirelessly with me towards preparing for this competition. Sponsorship wasn’t difficult this time around. The Ministry of Sports took care of our expenses and a couple of my sponsors gave towards gear and spending monies.”

Alexander will be using the competition in preparation for the 2019 Nationals. The Grenadian deadweight lifter has recovered from injuries sustained during his last competition. “I got injured in the past but when age is on your side it’s easy to recover so I am injury free now. I competed in about 17 major competitions since 2013, placing top 4 in every competition. Presently I am the only Grenadian with a strongman gold on the international stage.”

Alexander is a graduate of St George’s University where he attained a bachelor’s in psychology in 2017.

The Iron Asylum Strongman team was founded in 2015 as a small group of friends who were serious about their training and wanted a dedicated place to get together. It has grown to a large family with everything you could ever need to advance in the sport.

NOW Grenada is not responsible for the opinions, statements or media content presented by contributors. In case of abuse, click here to report.
Tags: curlan campbelldominic pierremarcus alexandermc elvin popestrongman
Next Post