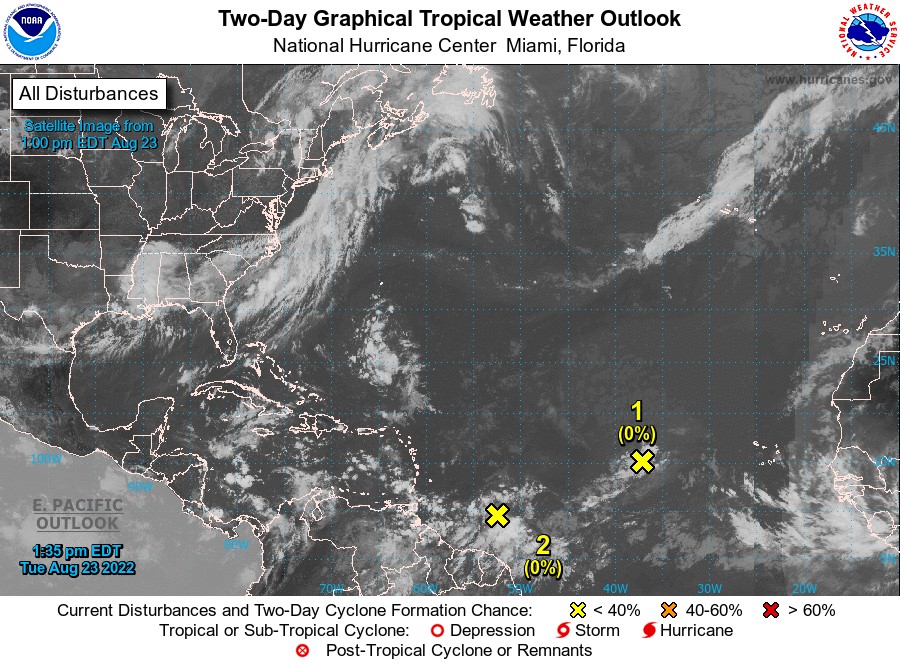 An Atlantic Ocean tropical wave is along 55°W/56°W, approximately 335 nautical miles east of Grenada. Its axis extends from 22 °North southward and is moving westward 10 knots. Based on its forward speed, this wave is expected to traverse Grenada on Wednesday. Model guidance is indicating the potential for cloudy conditions with showery activity on Wednesday night into Thursday morning.

Shower activity remains minimal in association with a tropical wave located several hundred miles west of the Cabo Verde Islands. Further development of this system is not expected during the next several days while the system moves westward to west-northwestward at 10 to 15 mph across the tropical Atlantic. This system has a low chance, near 0 percent, of becoming a tropical cyclone within the next 48 hours.

East of The Windward Islands:

A large area of disturbed weather has formed centred several hundred miles east-southeast of the Windward Islands. While this system is currently disorganized, environmental conditions could become more conducive for development in a few days when the system approaches the Windward Islands or southeastern Caribbean Sea. This system has a low chance, near 0 percent, of becoming a tropical cyclone within the next 48 hours.

The Meteorological Service will continue to monitor these systems.

The next update will be issued at 8 pm.