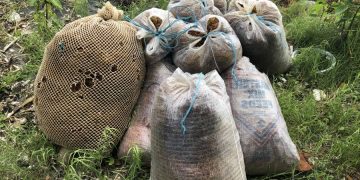 This story was posted 3 years ago
in Agriculture/Fisheries, Environment, Video
4 min. read
Share

One woman in the parish of St Andrew was given a strict warning by the officers of the Grenville Police Station in connection to the theft of sea moss from an aquaculture project site at Telescope, St Andrew.

According to lead consultant on the project, Dr Ashley John, there have been incidences where people, including young children, have been spotted illegally harvesting juvenile sea moss which is being cultivated as a pilot project that aims to provide data to international funding agencies on the sea moss mariculture industry and its viability to Grenada.

Two experimental plots were implemented by the Ministry of Agriculture, Lands, Forestry, Fisheries and the Environment through the United Nations Development Programme (UNDP) Integrated Climate Change Adaptation Strategies (ICCAS). The project created La Baye Alternative Livelihood Organisation Inc which spearheads the cultivation and maintenance of plots of sea moss measuring 50,000 square feet. Recently, the site has been plagued by theft and it is estimated that the loss is in excess of $2,000.

“What people need to be aware of is that these projects are protected by mechanisms put in place by the Fisheries Division respectively, when you enter a sea moss plot, note it is not regarded as ‘growing in the wild,’ but instead you are trespassing. These aquaculture projects are funded by international agencies and when they go in and interfere with the growing sea moss, it seriously jeopardises the sustainable livelihoods of those hardworking citizens in the community who have faced the hot sun, water for hours within a three month period.”

Dr John said it is also distasteful that the penetrator would allow young children to partake in such a heinous act which resulted in the theft of half of the entire experimental plot. “I arrived around 11 am on Thursday and I saw a group of children in the sea with what appeared to be a seine and I saw a lady on the shore and she was standing next to a big heap of sea moss. So I observed and realised that the children were picking heaps of sea moss and throwing them into the seine and then bringing them onto the shore.”

The first strategy that will be put in place is to increase their level of surveillance using both manmade patrol of the area and use of technology. Secondly, the organisation has vowed to work closely with the RGPF to ensure that people are deterred from trespassing. But one of the strategies to be put in place, Dr John indicated is to encourage people to get involved with sea moss farming and harvesting by offering to train them.

“We want to encourage people that if they are interested in this project to come and speak with Willan Andrew and be incorporated into the project where they will be trained, and be allocated a plot at the right time, so they don’t have to steal,” he said.

The consultant is of the view that the theft of sea moss is being driven by the economic benefit that can be derived from sea moss cultivation as plots in Telescope Bay and in Union Island are being affected.

Due to the reoccurrence of theft, Dr John believes that retailers of sea moss must request a receipt of proof of sea moss plot ownership from their suppliers to ensure that these supplies obtain sea moss legitimately. Furthermore, he added that the species of sea moss cultivated is known as the Eucheuma Cottonii is not indigenous to Grenada and was imported, therefore it will be easy to spot since it is quite different from the local sea moss.

He said the organisation is presently testing sales in the United States and in Canada which is a testament to the export potential of sea moss, but most importantly the project acts as a safe haven for the regeneration of marine life. “We are now testing sales in the United States and in Canada and then it is also helping with the climate change variation in the area because we dive this bay and we recognise that a lot of the young fishes were missing. But thanks to the project, now that the plots are in place we now have the population of young fish coming back because these plots provide an ecosystem to replenish the fish stock.”

Under Grenada’s laws regarding praedial larceny, any person who commits an offence against this act shall be liable, except where some other penalty has been provided by this act, to a fine of not less than $3,000 or more than $10,000 and imprisonment for 24 months. Dr John said the perpetrator can consider herself lucky as the force of the law was not administered since it was their decision not to pursue the matter further.