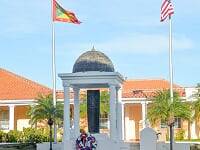 This story was posted 5 years ago
in General News
3 min. read

34 years ago, on 25 October, 19 US soldiers died in Grenada when America stepped in to assist the island of Grenada. Every year on 25 October, the St George’s University (SGU) holds a memorial service to honour the lost soldiers and strengthen their bond with the Grenadian community.

SGU’s Thanksgiving Ceremony on the 34th year was held at the Modica Hall and was chaired by Provost Dr Joseph Childers. He reminded those present of the main reason they were gathered, which was to ‘to observe the ultimate sacrifices made and recognise the lives of those who perished 34 years ago,’ for they ‘served with conviction and their contributions will forever be recognised and appreciated.’

Dr Jordan, who was in Grenada at the time of the 1983 occurrence, reminisced on what transpired. Speaking about the bitter moments, he referenced those who were injured and those who died, including the Grenadians and Cuban workers. The sweet moment, according to him, is the existence of the University as it is today.

Hon Linda Taglialatela, US Ambassador to Barbados, the Eastern Caribbean and the OECS, also made brief remarks. The day’s event, according to her is to ‘commemorate the shared history and the bonds of friendship between the people of the United States of America and Grenada, Carriacou and Petit Martinique.’

The fallen soldiers are:

As she recognised the 19 fallen soldiers, she stated that the memory of their sacrifices ought not to be obscured by the passage of time, and, ‘the United States of America stands firm in its commitment to partner with the Grenadian people as you move forward….’

The ambassador made specific mention of and praised the St George’s University for creating what she described as ‘global linkages’ through its diverse faculty and student body. Additionally, ‘as we remember the heroism of 1983, let us commit to even greater living monuments to democracy to civil responsibility, to friendships and to cooperation.’

Hon Gregory Bowen represented the Government of Grenada at the university’s event. Commenting on the solemn events 34 years, ago, the minister stated that the country was ‘plunged into chaos.’ However, through the assistance of regional and international nations, ‘Grenada has been restored to a peaceful and stable democracy,’ and ‘we are forever grateful for the sacrifices and for the lives that have been spared,’ and the soldiers who brought about peace in the Grenadian society.

In his speech, Bowen reminded the audience that ‘we are a people intrinsically bound by our shared past experiences,’ despite their geographical origin. “On this Thanksgiving Day, I call on all of us to put aside our differences, real or imagined, and to remember our collective responsibility to never forget that we cannot get ahead without assistance from our brother, our sister and our neighbour,” he said.

The minister used the opportunity to express sincerest gratitude to the SGU community for their countless contributions to the Grenadian community. “On Thanksgiving Day each year, we continue to express our gratitude to you the family of St George’s University for using your educational platform to ensure that the events of 1983 remain in the collective consciousness of our people.”

Governor General of Grenada, Her Excellency Dame Cecile La Grenade laid the wreath at the foot of the monument built to honour the US soldiers who perished 34 years ago. 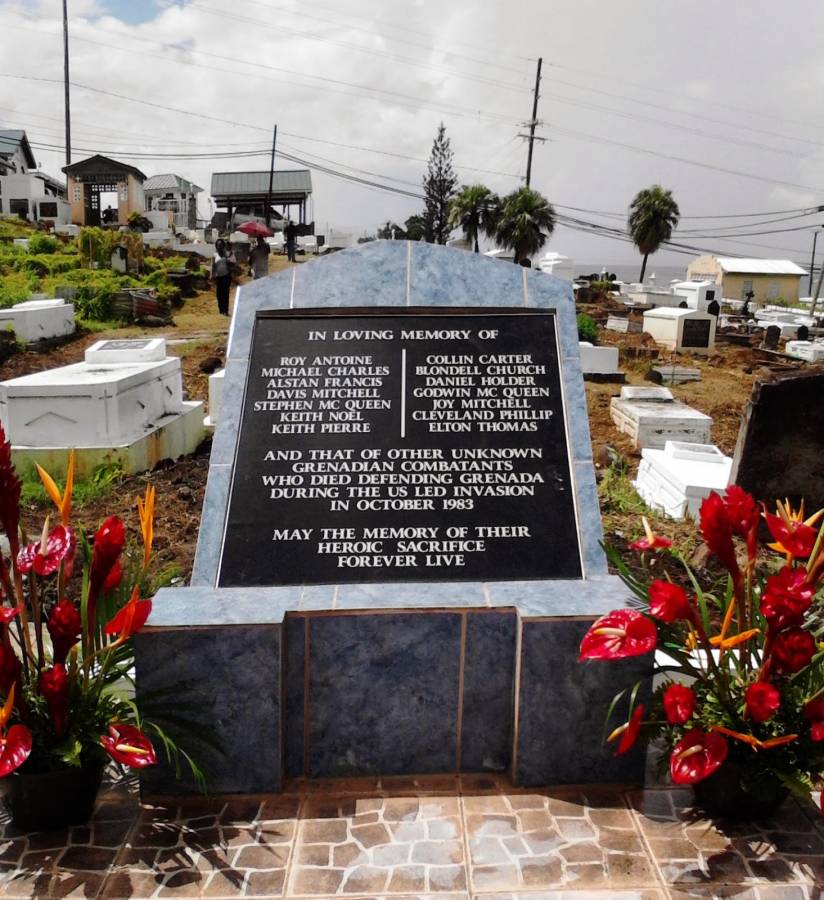