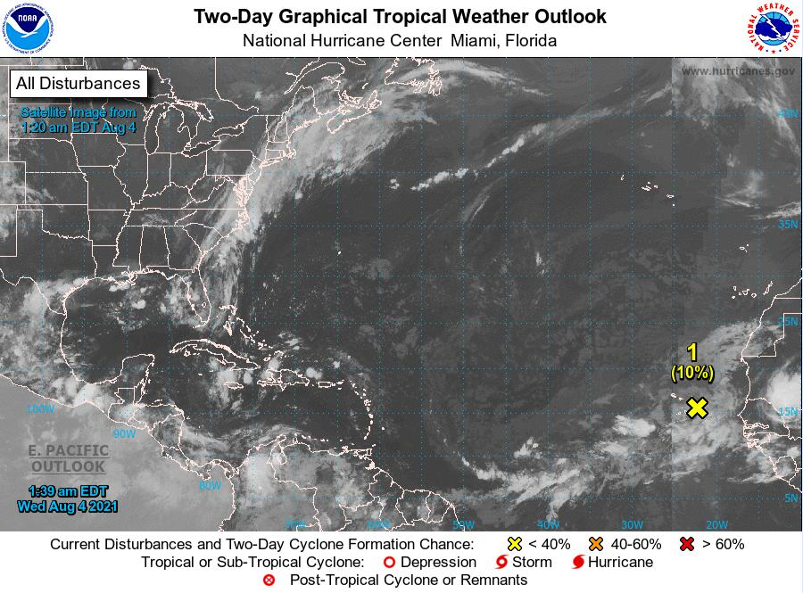 This story was posted 1 year ago
in Notice, Weather
1 min. read

Tropical wave: An Atlantic tropical wave is now near 52° W (approximately 540 nautical miles east of Grenada). This wave extends from 17° N southward and is moving west around 10 to 15 knots. Based on its new forward speed, the axis of the wave is expected to cross Grenada tonight. Recent satellite imagery indicates that there has been a decrease in cloudiness in and around the wave. The latest model guidance is not predicting significant precipitation over Grenada from tonight into Thursday. However, model output can change with time. Hence, the Meteorological Service will continue to monitor this wave.

Low pressure: A small and weak area of low pressure, with limited shower and thunderstorm activity, is passing near the Cabo Verde Islands. Significant development of this system is not expected during the next day or so due to unfavorable upper-level winds and marginally warm waters. Afterwards, this system is forecast to move northward or north-northwestward over cooler waters, ending its development chances. Locally heavy rainfall and gusty winds are possible over portions of the Cabo Verde Islands through today. This system has a low chance, 10%, of becoming a tropical cyclone within the next 48 hours.

Elsewhere, tropical cyclone formation is not expected during the next 2 days.

The next update will be issued at 8 am.

NOW Grenada is not responsible for the opinions, statements or media content presented by contributors. In case of abuse, click here to report.
Tags: mbiatropical waveweather outlook
Next Post