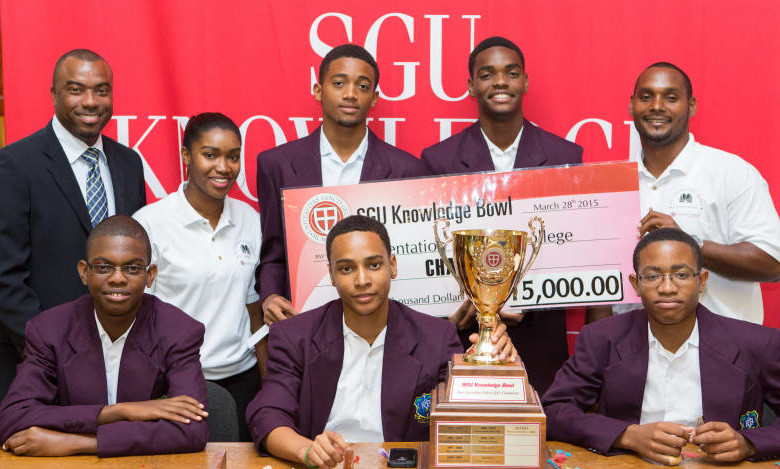 This story was posted 8 years ago
in Education
3 min. read

Celebrating its 10-year anniversary, this season’s SGU Knowledge Bowl was an exciting showdown between the defending champions, the gentlemen of Presentation Brothers’ College (PBC) and the ladies of St. Joseph’s Convent, St. George’s (SJC). Although both teams have made it to the finals four times before and won, this was their first time going up against each other in head-to-head competition for the trophy.

Affectionately dubbed the “Battle of the Schools on the Hill,” this year’s competition proved to be one of the most highly anticipated Knowledge Bowl finals yet.

Nevertheless, it was the boys in green who came out on top. After dominating SJC in the second round, PBC took a 23–point lead into the third and final round of the competition. SJC rallied to close the gap but it was too little too late. PBC won the series by the final score of 62–47, cementing its standing as the winningest team in Knowledge Bowl history. 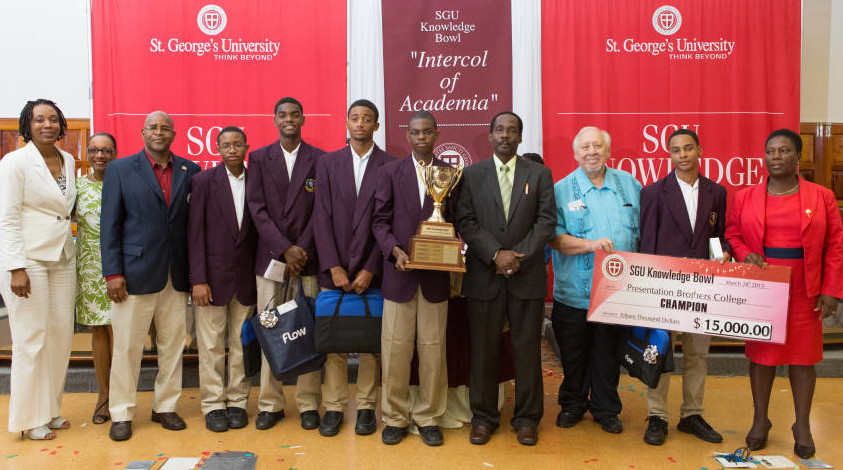 “This win means that we have actually retained the title first and foremost,” said PBC Vice Principal Kelvin Jacob. “It means that the guys have performed very well and their hard work has paid off, and also that this would be a great impetus for the other students who would want to be on the Knowledge Bowl team.”

For their school, the winning team received $15,000 and a Xerox color copier. In addition, each of the five members — Khalil Buckmire, Trent Strachan, Chike Dottin, Noah Bullen, and Adrian Andall — received a laptop, six months complimentary broadband service, their choice of $500 in a Super Starter or Honey Bee account, and a certificate of distinction. Their diligent coaches were awarded a weekend for two at Sandals LaSource resort, six months complimentary broadband service, and $500 in their choice of Super Starter or Honey Bee accounts.

After the win, Coach Mervale Abraham praised his team. “I am extremely proud of my boys right now,” he said. “Before the competition started, I asked them to just give me one shot, like the NBA Finals, and I will take them all the way, and they did it.”

As runners-up, the SJC team has secured for their school $7,500 and a Xerox black and white copier; their choice of $500 in a Super Starter or Honey Bee account; three months complimentary broadband service, and a certificate of achievement for each member of the team. For their hard-working coaches, a weekend for two at the La Sagesse & Petite Anse Hotel, three months complimentary broadband service, and $500 in their choice of Super Starter or Honey Bee accounts were awarded.

After 10 years, SGU Knowledge Bowl still remains a source of great anticipation, garnering huge support each and every year as students, faculty, and fans come out to cheer on the various schools and by continuing to encourage and promote friendly competition between the country’s secondary schools it maintains its title as the “Intercol of Academia.”

”It was a wonderful experience,” said Khalil Buckmire from the victorious team. “We grew over the past 10 weeks as individuals and also as a team. Our bond as friends has grown stronger. This event has helped us in preparation for exams because part of the Knowledge Bowl was individual study and group study. We have targeted many of the subjects and many of the syllabuses, and overall it has helped us tremendously going into CXC.”

NOW Grenada is not responsible for the opinions, statements or media content presented by contributors. In case of abuse, click here to report.
Tags: competitioneducationknowledge bowlpbcschoolsgusjc
Next Post 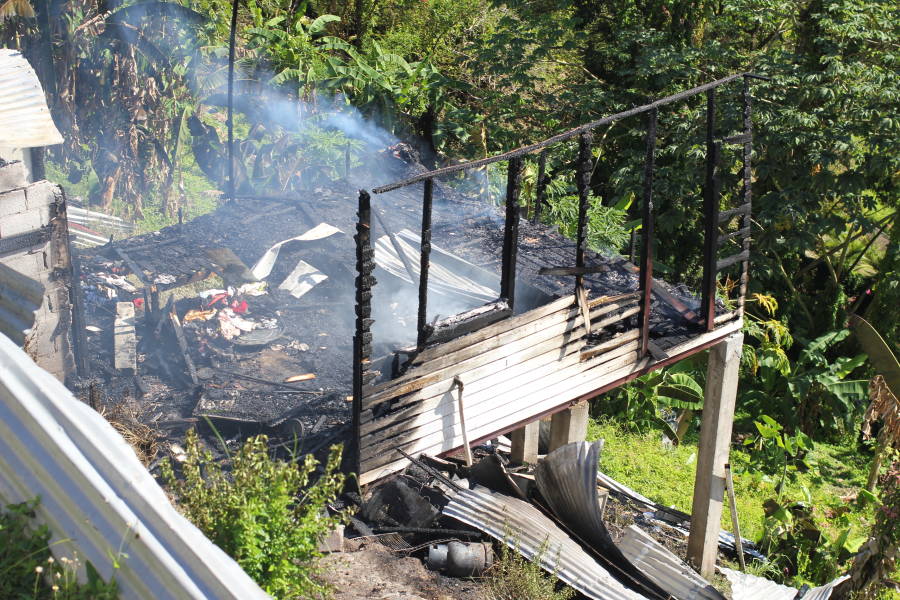